Connect with us
Related Topics:FeaturedWatch Party
Up Next

zwnews24.com | The fact or nothing. 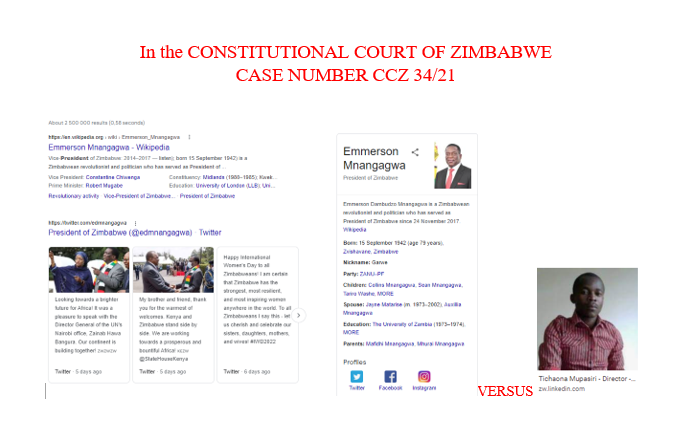 On 17 December 2021, Mr. Tichaona Mupasiri launched a court application in terms of s167(2)(d) as read with s167(3) of the Constitution asking the Constitutional Court of Zimbabwe (CCZ) to determine if President Mnangagwa failed to fulfill his constitutional obligations by failing and/or refusing to respond with facts regarding his state of knowledge and the extent of his personal involvement in the use of the reconstruction law, a law that was specifically created to deal with Mutumwa Mawere, to divest and deprive shareholders and directors of the control and direction of their companies.

In response to this application, President Mnangagwa states that the facts he deposed to are known to him and are true and correct yet in reality, he discloses nothing known to him although he admits possessing knowledge that should allow the CCZ to determine whether the decision to use the reconstruction act was motivated by any public interest or was triggered by a major political fallout that Manikai, who is the Second Respondent in the matter, said occurred as a matter of fact between Mawere and Mnangagwa.

In this article, we deal with whether the allegation made by President Mnangagwa that it is incompetent on account of the fact that it relates to his alleged conduct prior to the date he became President and as such cannot be scrutinized in terms of the provisions of the 2013 Constitution.

MUPASIRI’S ANSWERING AFFIDAVIT TO THE QUESTION OF WHETHER PRESIDENT MNANGAGWA’S OPPOSITION IS VALID OR NOT AS PER PARAGRAPHS (a)(4 & 4.1):

READ THE ABOVE AND JUDGE FOR YOURSELF.

President Ramaphosa testifies at the Commission of inquiry